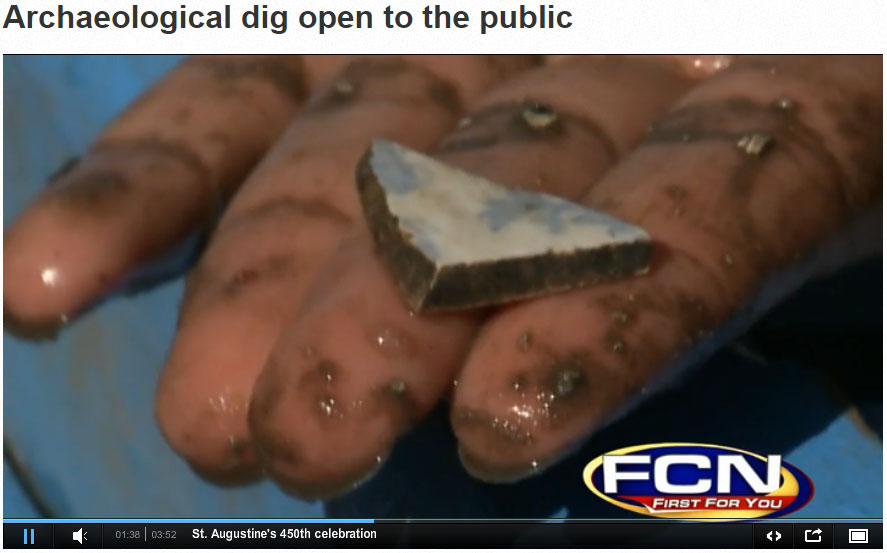 Florida homeschoolers have a unique opportunity this month to experience the unearthing of history as it comes out of the ground. From Feb. 3 until March 14, 2015, the Ximenez-Fatio House Museum in St. Augustine will launch an archeological dig at the historic property, and the public is welcome to watch and discover for free.

According to Julie Vaill Gatlin, executive director of the House Museum, the location at 20 Aviles Street is one of the most excavated sites in the oldest area of downtown St. Augustine. The project is expected to produce artifacts that date back to the original town plan of 1572 and Florida’s Territorial and Early Statehood periods from 1821 until 1861, going forward. The project will be open to the public and is free of charge for viewing on Tuesdays through Saturdays from 11 a.m. until 3 p.m. For more information, contact Julia Vaill Gatlin at 904.829.3575 or info@ximenezfatiohouse.org.

The archeological team will be supervised by Carl D. Halbirt, the City of St. Augustine’s key archeologist, along with his team, and Sarah E. Miller, Northeast Region Director of the Florida Public Archeology Network (FPAN) and the non-profit’s volunteers, and local students.

The project is designed to provide archaeologists with a rare chance to see what had been buried under the property since the earlier dig located behind the main house which produced the renowned Caravaca Cross. Halbirt found the cross buried underneath an old trash pit during a 2002 dig. The cross is believed to have become popular in the 17th century to celebrate the end of the plague. The archeological dig team will focus on a weekly schedule with concentrations in prehistoric and historic ceramics, dendrochronology, nails, middens, and geophysical evidence.

According to Halbirt, St. Augustine’s archaeological heritage is unparalleled in the quantity and diversity of remains buried beneath buildings, streets, and backyards. The deposits expected to be found at the Ximenez-Fatio House will not only reflect the City’s European origins since 1565, but will also address the rich and varied Native American heritage that has been in existence for thousands of years.

The Ximenez-Fatio House was built in 1798 by Andres Ximenez, a Spanish storekeeper, the original portion of the coquina house and the detached kitchen became a general store, tavern, private residence and fine boarding house for military officers, sea captains, dignitaries and families from the north and south. The property was purchased by The National Society of The Colonial Dames of America in The State of Florida (NSCDA-FL) in 1939 and became one of the South’s most authentically preserved and accurately interpreted historic house museums according to several national experts.

As a single woman who raised four nieces and one nephew, Miss Fatio had previously operated two boarding houses. She was an educated woman who spoke four languages. Miss Fatio was the daughter of Don Francisco Felipe Fatio, a prominent, successful businessman and landowner in northeast Florida.

The Ximenez-Fatio House Museum is open Tuesday through Saturday, 11 am to 4:00 pm and tours of the buildings and rooms are available from 11 am until 3:00 pm, and closed on Sundays and Mondays. Tours are free for St. Johns County residents. Admission pricing for adults is $7; families $15, and for students, seniors and military $5. Group tours are welcome at $4.50 per 10 or more.

The Ximenez-Fatio House is listed in the National Register of Historic Places and the Historic American Buildings Survey. It is a Florida Heritage Landmark and is also recognized as an integral part of the St. Augustine Town Plan National Historic Landmark District. Ximenez-Fatio House has been rated as the #1 attraction in St. Augustine by TripAdvisor and received TripAdvisor’s 2013 and 2014 Certificate of Excellence designation.

Ongoing public awareness events are held at the Ximenez-Fatio House as part of the non-profit organization’s mission to further America’s national heritage through historic preservation, patriotic service, and educational projects. Visit the website at www.ximenezfatiohouse.org, Twitter at https://twitter.com/XFHouse and the Facebook page at https://www.facebook.com/XFHouse?v=wall&viewas=0. View the video at https://www.youtube.com/watch?v=ZDp_Nr7IAzU.